Jim Morrison is a Ski Mountaineer. What does that mean? In simple terms, he likes to climb up things with skis on his back and then strap in and ski back down. Jim can be found skiing powder in Lake Tahoe’s West Shore woods, couloirs in Colorado’s back country near his home in Telluride or on some of the biggest mountains in the world (yeah, Everest).

How does someone get into Ski Mountaineering? For Jim, it started growing up in the Bay area of Northern California, going back and forth to the Lake Tahoe area, where the family would do a lot of camping out of their VW Bus. The outdoors became such a huge part of Jim’s early life that in the summer between his Junior and Senior year of high school, he headed down to New Zealand to ski during their winter. Ultimately, this would lead to him spending his senior year in Tahoe, learning by independent study and doing what else…skiing.

Fast forward, a tragic accident in 2011 would take Jim’s family, and it would be the mountains, running and cycling that would help rejuvenate his life and allow him to once again be present and look forward. One day he started running despite never identifying as a runner. He ran a bit more and one day decided to run a Marathon, then he did an Ultra Runner favorite – Rim to Rim to Rim in the Grand Canyon. Running helped Jim get his life back, eventually going full circle back to his roots as a skier.

A successful businessman with a home construction company in Tahoe, Jim has climbed and skied all over the world. In 2018, he climbed 3 different 8,000-meter peaks including Mount Everest along with the 4th and 5th highest peaks in the World. He skied off the summit of Cho Oyu solo as part of a first decent on part of the Nepalese Peak and skied as much of Everest as the snow would allow. However, he is most proud of getting to pursue a dream of a first decent on Lhotse in September of 2018 along with his partner Hilaree.

In January of this year, before the threat of the COVID-19 Pandemic was well known around the world, Jim, his partner Hilaree, Jimmy Chin and Conrad Anker set off for an adventure in Antarctica. Jim had been to Antarctica before in 2015 and had climbed Mount Vinson the continent’s highest peak, but for Hilaree it would be her first time. Back then, Jim saw a ski line that got him very excited and had wanted to ski ever since. 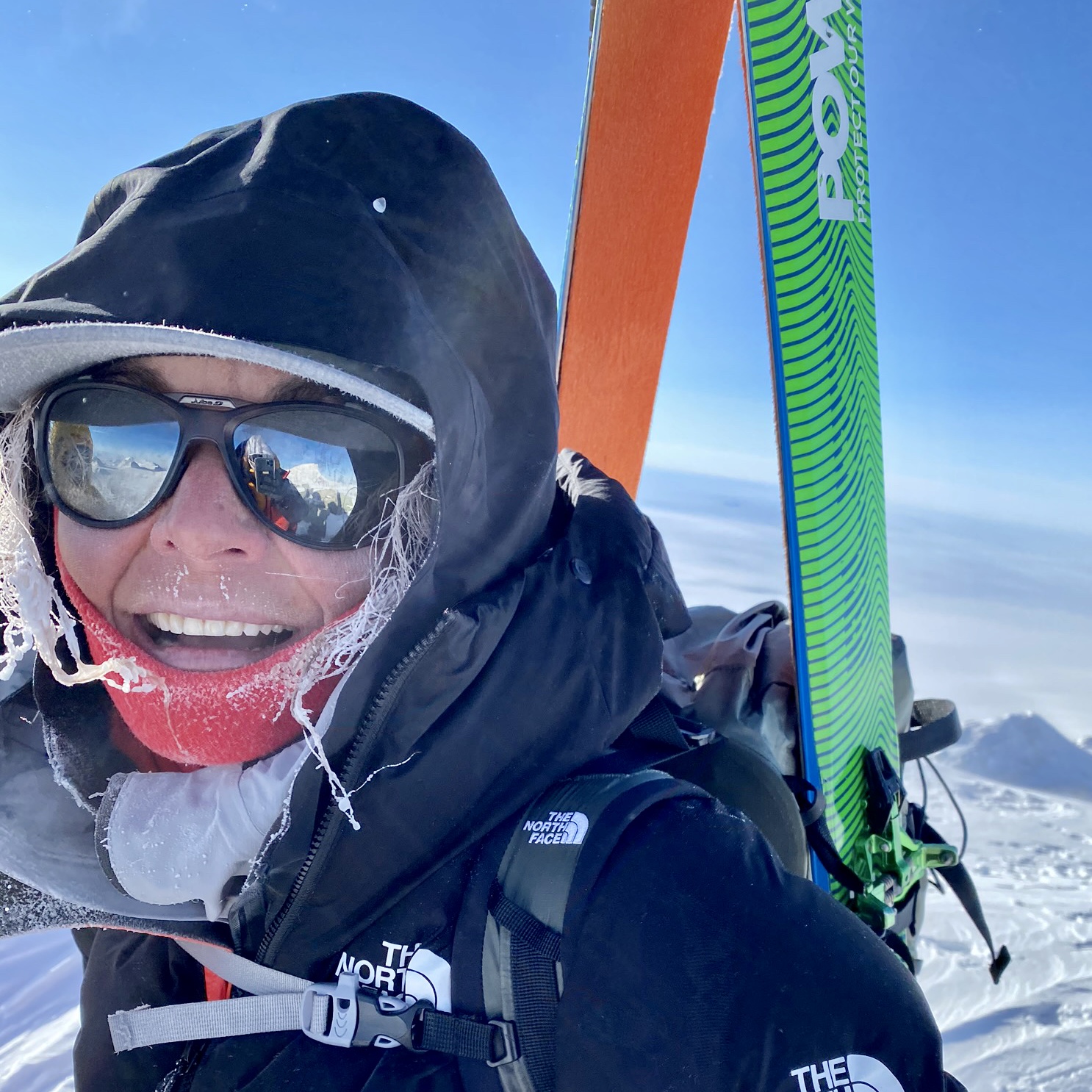 The team of four, would ultimately fly into Vinson base camp, and would make a single day push to the summit and back down. A 10,000-foot climb to a peak at 16,000 feet with very little acclimatization. There are theories that there is less oxygen in the air at the poles, so the peak of Mount Vinson, feels more like 18,000 ft. Once at the peak, the conditions were quite windy, and the original planned decent route did not look safe. After 45 minutes of deliberation, Jimmy, Hilaree and Jim decided to ski a different route, as to minimize the risk of avalanche (despite their occurrence being quite rare in Antarctica).

After a 19-and-a-half-hour day, 10,000 vertical feet and 18 and half miles of distance covered, the team made it back to base camp where a cook had some amazing pasta Bolognese waiting for them. While this one-day push is not unique, it is rarely seen. Jim an accomplished professional climber took 3 days and made 2 different camps during his climb in 2015. The summit is typically a 10-day trip for most climbers according to Jim. 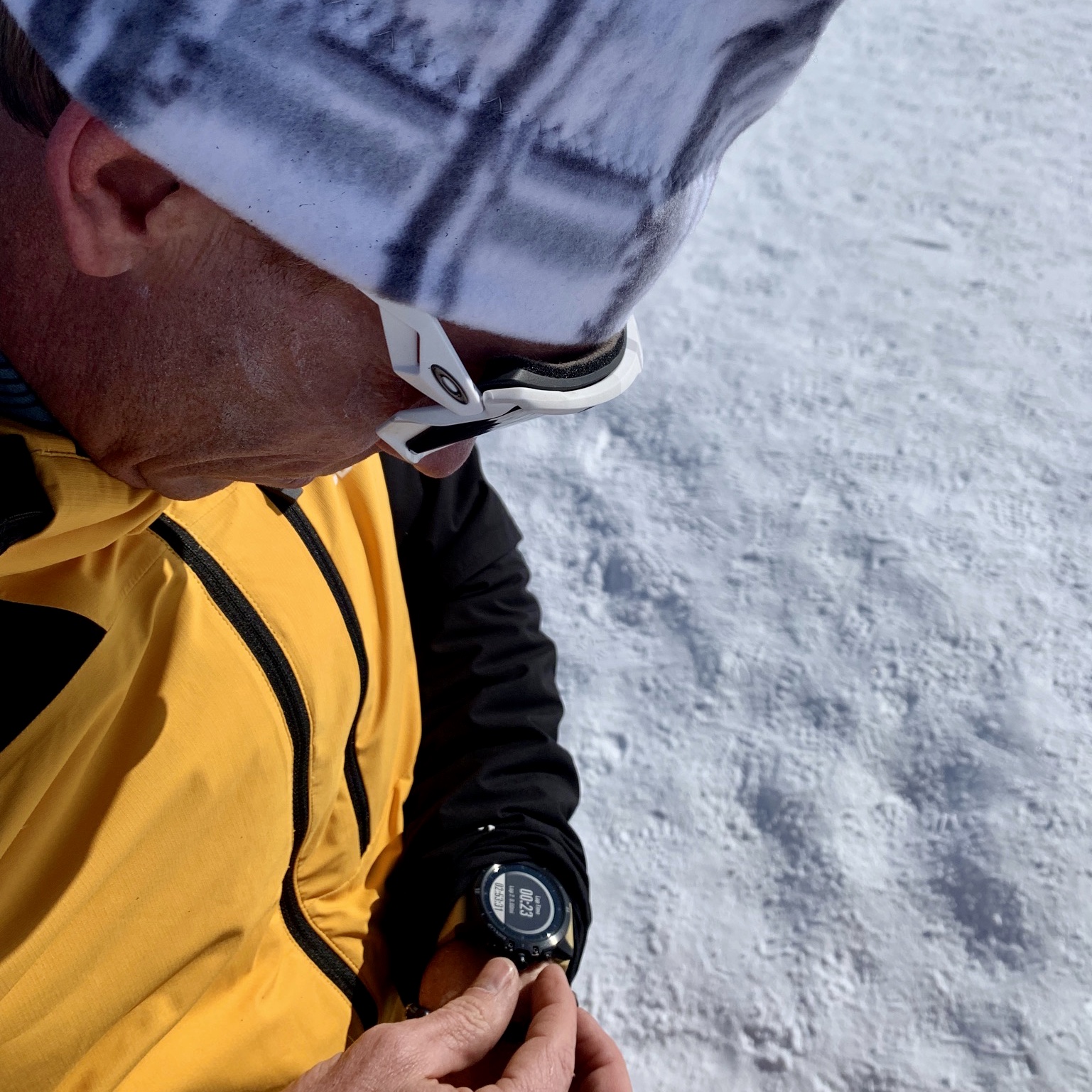 Taking his COROS VERTIX along for the ride, he had the opportunity to test the brand’s top of the line watch in some of the world’s harshest conditions. High altitude and low temperatures would put the best in class battery power of the VERTIX to the test. Jim remembers charging his watch and pulling it off the charger before taking off – he had about 92% battery showing on the watch face. By the next day when the team took a plane to their second climb – Mount Tyree, the watch was still at 54%, despite temperatures reaching -20 degrees Celsius at the summit and the air temperature never getting above freezing. Most watches would have needed several charges if they could even operate at all in those conditions but the COROS VERTIX saw less than half of its battery diminished over a 19.5-hour day of GPS tracking.

So how do you train for an adventure like this? It is obviously physically demanding, but there’s certainly a mental toughness that is required to accomplish something few if any of done before. Jim lives in an ideal location for mountain training – Telluride, Colorado. Living at about 9,000 feet he can get up as high as 13,000 feet pretty quickly straight from his backdoor. Most people do not have the luxury of being able to walk out of their house and climb a 13er just like that, naturally Jim has taken it a step further – leaving town in the morning, linking up nine 13ers and then returning to town all in one day.

To build up mental strength, Jim trains through all conditions. For the better part of his life he has made sure to go out on bad weather days, allowing him to understand the limits of what he can and perhaps more importantly what he cannot do. This allows him to push through certain weather and conditions, while having the safety net of still being close to home. One mantra that he lives by – “No matter how you feel, don’t worry it will change.” With this in the back of his mind at all times, it reminds him that when the adventure gets tough, it can get better and just as important, it keeps him from getting overconfident, as even on a great day, conditions can change at a moment’s notice.

Since returning from Antarctica, life has changed dramatically for Jim and Hilaree just as it has for nearly everyone on this planet. Any plans that they had for 2020 have had to be adjusted significantly. This included a planned trip to climb and ski University Peak in Alaska – a mountain that has been on Jim’s bucket list for nearly a decade. In addition, a planned trip to the high Himalayas for this fall is still up in the air. All of this can make it hard to stay motivated, but he tries to remind himself that this just means he has more time to prepare for adventures if they have to be pushed from 2020 to 2021. In fact, over the last month, he has been working very hard in the mountains. He climbed more than 80,000 vertical feet in March, certainly above average for the first quarter of the year, in part because of a goal he set for the Crush it for Climate fundraising campaign for Protect Our Winters. Through this fundraiser he has raised a whole bunch of money for a cause that he is tremendously passionate about, while on a personal mission to get into the best shape of his life.

If you are not familiar with Protect our Winters (POW), it is an organization with a strategic plan to leverage the outdoor community in the fight to prevent further climate change. Living in the mountains for 45 years, climate change is something that Jim has seen change his hometowns firsthand. He is incredibly passionate about POW and has tried hard to help make a difference. POW has utilized Jim and other athletes who have an impact to help raise awareness and raise money to make changes in policy and tip votes that are often won and lost on the margin. If you are interested in joining the cause, you can get involved by becoming a member. Their website offers tons of great research and resources and additional ways you can get involved.

For those interested in following in Jim’s footsteps, his best advice is to follow Conrad Anker’s adage of “hold fast,” this is sagely advice to first get through the current situation – “all storms pass, hold fast.” Beyond the pandemic, Jim suggests you simply go out and enjoy the mountain in your backyard when you can. Follow your passion to where you want to go. If you work hard and stick with it, you will be amazed with what you can accomplish.

*This article was written from a firsthand interview with Jim held in March, 2020.